The Virtues of a Digital Diet

Our two year-old recently had a meltdown because I took the iPod Touch out of her hands so that she could focus on eating her eggs and toast.

This incident might also bring a tear (of joy) to Steve Jobs and his usability team, but it sent a chill through my heart.  Our daughter’s greatest influence is…us.  And we have newspapers, smartphones, and sometimes laptops at the dining table.  We seem to be perpetually gorging on media, to the detriment of a balanced approach to real life.

“We have a crisis of attention,” announced a smart person at a digital media conference I attended in New York last week.  I don’t quite remember who said it, because, I along with the others in attendance, were half-listening, half keeping an eye on our various screens.  One another participant suggested we were now in a four screen world (TV, computer, mobile phone, and now iPad/slate), I saw whatever remained of my attention span shrivel up and die.

There’s even a new book on this subject, Hamlet’s Blackberry.  Here’s an excerpt from the Wall Street Journal Review:

It convincingly argues that we’ve ceded too much of our existence to what he calls Digital Maximalism. Less scold and more philosopher, Mr. Powers certainly bemoans the spread of technology in our lives, but he also offers a compelling discussion of our dependence on contraptions and of the ways in which we might free ourselves from them. I buy it. I need quiet time.

At the same time, near-panic ensues on Facebook and Twitter as people rushed to declare that they were the first to own an iPhone 4, while others declared their despondency at being stuck with “older” technology.  I was compelled to send this cartoon to at least four of my Facebook friends to assuage their feelings of being Left Behind: 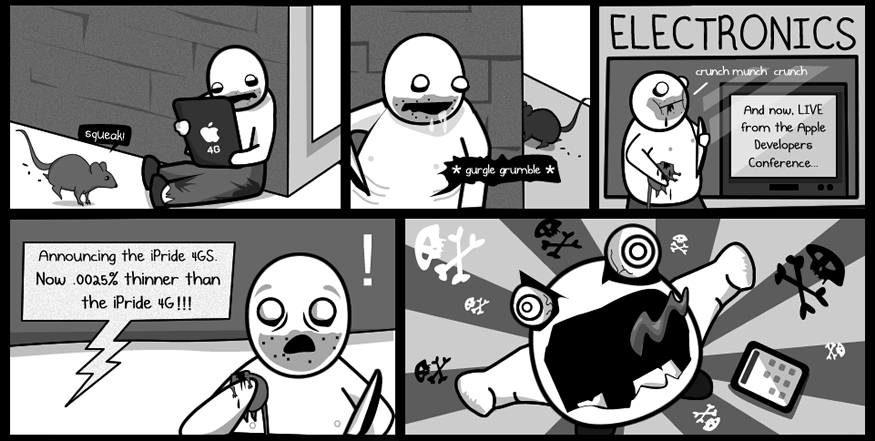 I’ve written about this before (see An Ode to Contemplation), but I’ve grown increasingly concerned about digital distraction — especially my own.  In our persistently connected state, are we really better off?  Stress and workload aside, what are we missing when are heads are bowed on deference to one of those four screens?  And why are we so captivated by the Bright Shiny New Thing?

So, my colleague Ron Krabill’s excellent TEDx Seattle talk, Beyond the Bright Shiny New Thing resonates even stronger with me, months later.  He argues that the newest technology isn’t always the best, especially as we seek to engage historically disenfranchised communities (i.e. the poor) with digital media.  It’s one reason why I’m suddenly “geeking out” — slowly turning away from OS X and Windows 7, and messing around with the wonderfully open, cheap (free) and lean Linux-based Ubuntu on a $300 netbook. [more props to the Apple design team, when my daughter saw me working on the smaller netbook, she started jabbing at the screen, hoping it was touch-enabled.]

But beyond simplifying my digital diet, I realize I desperately need to go on a media fast.  Clay Shirky celebrates our ability to collaborate more/produce more thanks to social media in his new book Cognitive Surplus (Yochai Benkler calls it excess capacity, enabling our ability to engage in “social production” — much like my time devoted to creating this post).  I think we sometimes need to take that time we once dedicated, as Shirky argues to living as a TV-fixated couch potato, to just be — and to focus on what matters most.  So to start, I’m pledging to keep my phone, computer and even newspapers far away from places of family communing, so that I can concentrate more…on family.

I love this video (yes, ironically shot with my persistently pocketable smartphone) of my daughter at nineteen months, ogling the “big iPod” in the window of the Apple Store.  Not because of her fascination with technology at such an early age (I joke that she’s beyond a “digital native” and started out as a “digital fetus”), but because ultimately what captivates her most is a yellow balloon.  Out of the mouths of babes…